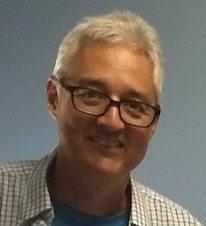 This site about Spam (the trademarked stuff) and spam (a generic class of canned meat) was partly the brainchild of Roy A. Summers, III, and evolved from a good natured prank that Roy played on me for my 50th birthday.

We recently lost Roy, so the whole SPAM site is dedicated to his memory. It really was his idea, and the story below shows how really funny and fun-loving he was.

How This Web Page Came About

It would be possible to spin a pretty good story about how the invention of the airplane were a joke. Say Wilbur dumped some bike parts and an old motor on Orville's lawn, and bet him that he could not make it fly. And if the story were true, then everything that has followed since, like fighters in the skies over the trenches in the Great War, great metal skinned bombers in the Big One, commercial aviation, and even space travel would have to be considered the consequences of a joke.

Sometimes, the saying goes, these things take on a life of their own.

Let us rewind to the dark days of October 2001. My brother Roy decided, as he sometimes does, to give me a joke present. He went out and bought 18 12 ounce cans of luncheon meat product. A couple were real Hormel SPAM, but most were knock-offs, some for the home market (Dutch Colony), some for the Asian market (Ma Ling, Winner Mountain), and some for the Middle Eastern market (Ziyad).

Roy scanned all six sides of each can, and proceeded to flood my inbox with the images. It was real SPAM, you see, not this penis-pill advertising that people just happened to call (lower case) spam. And this was the essence of the joke.

This left me literally holding the bag, a bag of 18 cans of luncheon meat, a fist full of images, and an exhortation to try and report on each of the different samples.

Roy had also formatted the images up into a table, a kind of proto Web page. It may have been for the convenience of mailing, or more likely just a convenient way of viewing all the images without having to step through them one by one. This became the germ of an idea for a more polished version of the Web page.

Since I was to open the cans and report on the contents, it seemed only logical to add a seventh scan to each set, the meat. Let's just say that there is a lot of information in the meat scan, it is the kind of thing that might induce you to take a bite, or to most decidedly not take a bite.

Roy had created a naming scheme for the images, for example 01a.JPG was the can front, 01b.JPG was a side, 01c.JPG was the back, all the way through to 01f.JPG for the can bottom. In this scheme the meat became 01g.JPG.

Very early on I understood that the organization of a comprehensive Web page would have to be automated, since our 18 cans could easily grow into, say, 50. I had done some programming to create picture galleries, and this was a natural extension of that effort.

So the documentation of America's SPAM addiction took shape. A trip to China yielded a few cans, and I have even had viewers go to the trouble of contacting me because they had images that could further the completeness of the collection. SPAM Hawaii is a prime example; I can't buy it where I live, but as a real SPAM it is important to the integrity of the site. Really.

For you America firsters, take note: a lot of the older cans were from Holland or Canada, but it seems like the U.S. is moving into a dominant role in the canned meat market, whether it is in traditional pork, or more Arabic friendly beef or poultry products. Someone please let the real Stephen Colbert know where America is number one.

From time to time both Roy and I add new cans, new brands, and when we passed 100 cans, I added a leading zero to all the canonical image names, just for consistency, and I'll add another when we pass 1000. There seems to be no end to America's appetite for not just SPAM, but for SPAM-like products, and I expect both Hormel and others to be adding flavors and features to the canned meat market for years and years to come.

On April 14, 2016, this site experienced a (very gentle) brush with fame. On the Rachel Maddow Show on MSNBC, Rachel was trying to describe a rather smarmy mailer put out by the Republican National Committee.

This was a teaser block, about 40 minutes into the show, for a story about some deceptive Republican fund raising mailers, signed by Reince Priebus himself. 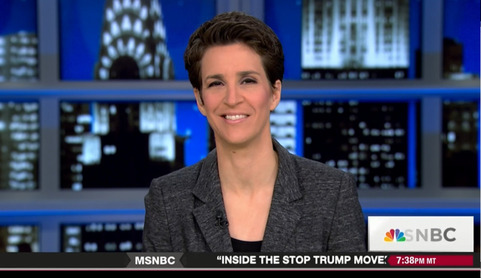 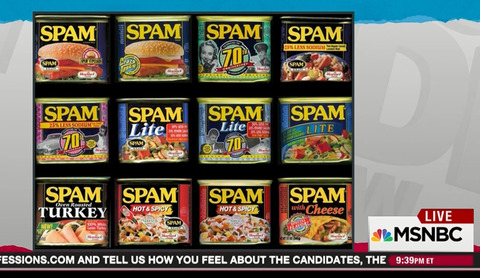 Yup, that image is this site. God, I love the Internet. Welcome to the fair use doctrine.